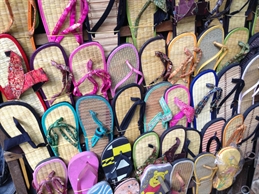 Asian footwear and apparel manufacturers are turning to alternative ports amid the nine-month slowdown at US West Coast ports.

The nine month gridlock being felt on the US West Coast due to slowdowns by the International Longshore and Warehouse Union (ILWU) are prompting shippers of footwear and apparel to shift shipments of cargo to alternative ports Seattle and Tacoma; Port of Prince Rupert, Vancouver; US East Coast ports; and the more expensive alternative of air freight air.

“That’s because they are pressured to ship to deadlines, but air freight is exorbitantly ten times more expensive than ocean freight,” said Nate Hermann, vice president of international trade for the American Apparel & Footwear Association (AAFA) in Washington.

The ILWU slowdown has caused cargo to sit idle on ships as they wait – sometimes 18 to 20 ships deep – for their turn to enter the seaports. The port delays are resulting in bigger inventories since product at sea is inventory, and “inventory is cash.”

Global management consulting firm Kurt Salmon predicts that the West Coast port congestion could result in retailers losing as much as US$7 billion this year. That cost comes from a combination of the higher price of carrying goods and missed sales due to below optimal inventory levels.

To counter the problem, shippers are adjusting production cycles in order to ship the next season of apparel and footwear products early. AAFA’s Hermann commented, however, that this “solution” is failing because many ships scheduled for rotations to the US West Coast ports also are being held up at the ports of origin in Asia.

“Steamship lines see no point in deploying their ships from port until they know they can get a backhaul,” Hermann said.

For the footwear and apparel industry, this means shipments are being delayed three to five weeks, which is creating havoc in the supply chain.

“Compounding the problem, since this is not an ‘official’ strike, the US government can take little action,” Hermann added.

The situation could also have a ripple affect on the recovering US economy. A report commissioned last June by the National Retail Federation and National Association of Manufacturers, both US trade associations, estimated that a 10-day shutdown at US seaports could levy a US$2.1 billion per day hit to the overall US economy. Together, manufacturing and retail industries make up more than 18% of the nation’s gross domestic product (GDP). About half of the nation’s international imports come into the country via the West Coast ports.

Meanwhile, the alternative seaports that are handling the cargo are facing their own problems because of the volume increases. “We’ve heard that the Port of Prince Rupert is backlogged from the volumes. We’ve also started to hear the same about the Port of New York/New Jersey,” Hermann said.

Compounding the problem, steamship lines are increasingly deploying vessels 8,000+ teu in size and consolidating cargoes through vessel alliances. In the United States, the trucking industry is also facing a shortage of truck drivers, causing more and more shippers to turn to the slower (but cheaper) alternative of rail freight.