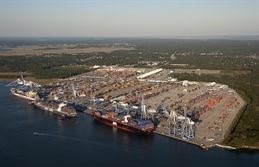 The port of Charleston has been given the go ahead for an important dredging programme.

The US East coast port of Charleston has been given the green light by the Army Corp of Engineers to undertake the highly important dredging programme to enable the port to handle the latest generation containerships.
The Army Corp has recommended the go ahead for a dredging programme that will see container handling berths within the port should be dredged to 52 feet, with the approach channel up to 54 feet.
The project is price tagged at US$510 million for the entrance channel dredging taking in passage to and from the Wando Welch terminal and the US Navy Base.
When the entire dredging programme is completed in 2019, Charleston will have no depth restrictions on handling any size of containership in service at that time.
In an interview with South Carolina Ports Authority President/Chief Executive Officer Jim Newsome, Asia Cargo News learned more of the dredging programme and future ambitions of the east coast port.
According to Newsome, “one of the biggest ambitions of Charleston is to provide the deepest harbour on the US East coast, and the new dredging programme will help achieve that particular ambition. The dredging programme should be completed by 2019, and if all goes well, 2018 could see the completion of the Wando Welch.”
At the moment, the largest container vessels handled by the port rank at between 8,000/10,000 teu capacity, but as Newsome continues, “the new water depth will enable Charleston to handle all capacity sizes.
“We are particularly eyeing the vessels in the 13,000/14,000 teu capacity frame, and have our sights on capacity that is made redundant from the Asia/Europe trades as even larger vessels are deployed in the coming years.”
The present newbuilding orderbook comprises no less than 37 container vessels of 16,000 teu and above on order for delivery by 2018, and doubtless they are headed for the Asia/North Europe trade to replace existing capacity around the 13,000 teu mark.
“The 52/54 feet of water depth following the dredging gives us the opportunity to handle the largest container vessels afloat, and we are particularly looking at the overflow from the Asia/Europe trade of 13,000/14,000 teu vessels,” Newsome says.
“The market is there, the handling ability will be there and by mid-2016, the Panama Canal widening should be completed opening up another conduit for deployment of these vessels,” he says.
“Initially, we have our sights on the Suez Canal route connecting Asia and the US East coast, and we have container handling equipment on order such as 155ft high crane to handle the vessels and their cargo, but by mid-2016 with the Panama Canal route open, there will be a further opportunity for the lines and ports to develop trades.”
One of the big questions surrounding Charleston’s growth ambitions is the port’s ability to ensure positive answers to the big question – “Doesn’t increased cargo flow sometimes lead to port congestion”?
But Newsome has already figured out the answers to that one “The big issues we have at Charleston are the gate opening hours container terminal programme “Present terminal gate opening hours run from 0700 to 1800 hours the week, but beginning from 2015, these hours will be extended and we will also include Saturday gate opening hours as well”
Right now, Charleston is the biggest exporter of containerised cargo on the US East coast with around 48% of container cargo handled involving export commodities and export volumes over the port increased last year by 7.7% on 2012
Latest figures from Charleston show export volumes to have risen by 11% during August 2014 compared with August 2013 to hit 617,957 teu So for Charleston, the growth potential is definitely there, and with export cargo mainly comprising heavier deadweight cargo, the importance of the dredging programme is underscored even more for the future.