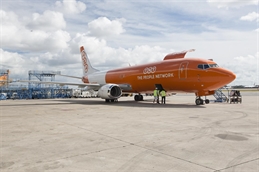 A US$4.8 billion offer by FedEx to acquire integrator TNT would boost its position in the European express market, but would have limited impact in Asia, the Pacific and most other markets.

FedEx is attempting to close the gap that has separated it from rivals UPS and DHL through the acquisition of the world’s fourth-ranked integrator. The US firm has tabled a €4.4 billion (US$4.8 billion) offer for TNT.

For the US-based integrator, a takeover of TNT would drastically augment its position in the European express market. TNT ranks third on this scene with a market share of 12%, behind DHL (19% market share) and UPS (16%). FedEx, which has concentrated chiefly on international flows in Europe after a haemorrhaging initial foray into the market in the late 1980s/early 1990s, commands a relatively modest share of 3%.

Fred Smith, chairman, president and CEO of FedEx, said the company had “long recognized the need for a complementary European ground network. TNT is an exact strategic fit and will dramatically lower our costs,” he stated.

“The exchange rate is favourable, and the EU economy appears to be growing a bit, fuelled by the lower price of oil and quantitative easing by the European Central Bank,” he added.

Outside of Europe the marriage would have limited impact in most markets except Brazil, where TNT acquired the two leading domestic express parcel operators and tried to merge them in a botched integration that caused years of red ink. In Asia, TNT has divested itself of its surface transport network in China and concentrates on flows between Europe and a small number of metropolitan centres in Asia. Since the restructure following the cancellation of the planned UPS tie-up, its focus has been primarily on its European network, which has generated the bulk of its revenues and income.

The transaction has the unanimous support of TNT Express’ executive and supervisory boards. After the planned €5.2 billion merger with UPS fell through because of resistance from European antitrust authorities a little over two years ago, the company had embarked on a turnaround plan under a new management, but most observers expected an eventual takeover by another company. Horst Manner-Romberg, principal of express parcel research and consulting firm M-R-U, described TNT as “too big to die, too small to survive on its own.”

The European authorities’ veto against the UPS-TNT marriage raises question marks over the TNT-FedEx alignment. For their part, the prospective partners have expressed confidence that their deal will receive the blessings from Brussels. They argue that it would increase competition by establishing a stronger third player in the market. According to one report, European shippers have expressed their support for the tie-up.

To comply with competition regulations in the EU, the pair will sell off TNT’s air network, which operates a fleet of 54 aircraft, including some B777 and B747 freighter models and a combination of BAe 146, Boeing B737F and B757Fs. At this point, it is not clear who would operate the fleet under contract terms.

FedEx has signalled that it intends to keep TNT’s hub in Liege and its own European hub in Paris, but in the long run, there are questions over the viability of running multiple hubs for one region.

In anticipation of slow action from governments and regulatory authorities, the deal is not expected to be complete before the first half of next year. FedEx agreed to pay TNT a €200 million break fee if it were to change its mind on the merger in the meantime. Under the terms of the agreement, competitors can submit bids for TNT within the next eight weeks. If an offer exceeds the existing bid by 8%, the TNT-FedEx marriage plans are off. Since nobody stepped forward over the past two years to make an offer for TNT, there are broad doubts that such a counter-offer would materialise.

FedEx is confident, but predicts a long slog to align the two operations. “Integration will take three or four years, but the benefits will far outweigh the integration costs,” stated FedEx CFO Alan Graf.

Many observers regard FedEx-TNT as a more complementary fit than the earlier UPS-TNT scenario, given the relative weakness of FedEx in domestic and intra-EU flows, which is precisely the strong suit of TNT. The offer from UPS was widely regarded as a spoiling tactic by the US player to forestall a FedEx-TNT merger.