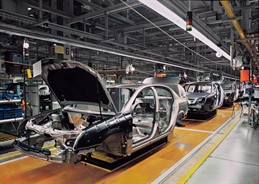 US car makers have kept a low profile in the latest debate, but it is common knowledge that they are not cheering for tariffs.

After a strong 2018, logistics providers to the automotive industry are bracing themselves for slower going in diminished visibility.

Above all, uncertainty over trading conditions as a result of tariffs is clouding the outlook. This does not only affect the US-China trade lane. The US administration threatened earlier on to slap as much as 25% of tariffs on imports of cars and auto parts in the name of national security, but recent noises from Washington suggest that duties on auto imports from Japan and Europe may be postponed by six months or so while the US-China trade spat enters a new round of tariff moves.

US car makers have kept a low profile in the latest debate, but it is common knowledge that they are not cheering for tariffs. Ford suggested last year that higher duties on US metal imports could affect its bottom line by as much as US$1 billion.

General Motors is not preparing to ramp up production in anticipation of less competition from foreign brands. It is cutting back. Five of its North American plants and two more unidentified production facilities will not be assigned new vehicles or components as a of next year.

At the same time virtually all car makers are shifting gears as they look to build up their capacity to turn out electric and hybrid vehicles amidst rising predictions that the end of the internal combustion engine is on the horizon. Add to this the emergence of autonomous vehicles, and the industry is in for a tectonic shift – with far-reaching repercussions for the logistics sector. Tony Fondevilla, senior vice-president automotive logistics at CEVA Logistics, reckons that automotive supply chains will undergo more change in the coming five years than they did in the past 100 years.

Not only the nature of vehicles and the market are undergoing profound change. Fondevilla said that auto manufacturers’ approach to the supply chain is changing, showing a greater resemblance to the high-tech and e-commerce sector.

As a result, demands on logistics providers have been stepped up. Forwarders as well as carriers have to act and react faster than before and must provide heightened visibility.

This goes hand-in-hand with a greater call for digitization. DB Schenker has set up an on-line platform for the central management of spare parts orders within a global distribution network. The logistics firm claims that this brings significant reduction in transit times and cuts average logistics costs by up to 30%.

In another move towards new auto horizons Schenker is looking to add 3D printing capabilities to its arsenal in order to produce replacement parts. This should bring about reduced warehousing costs and quicker deliveries owing to faster production.

Schenker is responding to the rise of electric vehicles with plans to specialize in the storage and transport of lithium batteries. Others also sense a need for special expertise in this arena. CEVA is preparing to establish a special team in its automotive division to deal with lithium batteries.

For the most part lithium batteries are moved by ocean vessel, but all-cargo airlines are bracing themselves for larger numbers of such shipments. Many auto makers officially pooh-pooh the use of airfreight, but their actual need for it keeps climbing. Airlines have seen growing demand from the automotive sector.

One reason for this is the shortening of production cycles of models, the broadening of some car makers’ portfolio another. For one thing, these developments have led to an increase in prototypes being flown around the world for testing purposes. Canada, for one, is a popular destination for winter testing of new models.

Flying complete vehicles faced some heavy restrictions after the investigation of the crash of a National Airlines Boeing 747 freighter in Afghanistan in 2013 found that the incident had been caused by a military vehicle in the cargo hold that had not been secured properly and struck critical operating systems. United Airlines solved the problem with the development of a special bracket to hold vehicles in place on board.

Meanwhile, some forwarders are working to step up their involvement in the automotive sector. Dachser recently opened an automotive competence center in Atlanta, which offers dedicated customer service teams. This followed the installation of a similar set-up in Mexico.

In Europe the forwarder set up a special shuttle service for Volvo to move spare parts from its base in Sweden to warehouses across Germany with a customized solution.

As the auto industry accelerates its move towards electric and hybrid cars and autonomous vehicles, its appetite for bespoke solutions is likely to keep growing.