Tweet
Rating
KOREAN TO FOCUS ON BELLIES FOR GROWTH 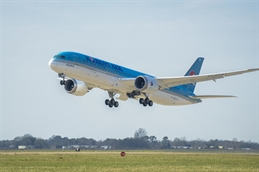 Korean Air Cargo is focusing on the belly capacity of the airline’s growing passenger fleet.

In an increasingly competitive market, Korean Air hopes to maximize utilization of its passenger fleet’s belly space and to attract more high-yield cargo as part of the growth strategy for its air freight business.

According to the company’s management development plan released in February 2019, the freighter fleet will remain at 23 aircraft, consisting of four Boeing 747-400ERFs, seven 747-8Fs and 12 777Fs, for the next five years, while the number of passenger aircraft will rise from 143 to 167. Korean Air Cargo is going to focus more on the belly capacity of the growing passenger fleet in order to avoid overcapacity.

An expanding passenger fleet also means a growing belly network. As an example, Korean Air launched a five-times-weekly flight between Seoul and Boston with a 787-9 in April.

“For this purpose, we will develop new commodities and customers that use belly space,” Noh says. “This will also help us to operate the required size of freighter capacity to suit the market demand.”

The Boston route is operated as part of a trans-Pacific joint venture between Korean and Delta Air Lines. The partnership, which formally began in May 2018, specifically provides for enhanced cooperation between the two airlines’ cargo businesses, offering a combined network of 290 destinations in the Americas and more than 80 in Asia.

“Customers benefit from enhanced services and extended networks by utilizing the joint belly network on trans-Pacific routes,” says Noh. “In addition, we are working to expand our customers’ options by forming partnerships with 92 airlines, such as interline flights, cooperation agreements and special prorate agreements.”

At the same time, Korean has been developing its freighter network, monitoring changes in the world economy and logistics flow to explore profitable routes.

“Recent achievements have included the Delhi route, a trading centre in northern India which has a high economic growth rate of 7%,” Noh says. “We launched the Delhi route in July 2018 and fly there three times a week with a 777F. We will keep paying attention to the Southwest Asian markets including India.”

Apart from Delhi, the carrier boosted the frequency of its freighter service to Guadalajara, Mexico, last year from three to four times a week. Earlier this year, Korean also launched an additional weekly frequency to Halifax, a route which was just launched in May 2018.

Special cargo shipments such as e-commerce items, fresh produce and pharmaceuticals are all growing segments that present carriers with a multitude of possibilities. According to Noh, Korean Air Cargo is making sure that it makes the most of the potential offered by these verticals.

“We are finding new product markets based on know-how accumulated over 50 years and our expertise in special cargo transportation,” he says. “In the special cargo market, which has soared recently, we have steadily increased sales of pharmaceuticals and fresh cargo through aggressive market development and will continue to attract more demands for profitable items this year.”

To affirm its handling expertise and professionalism, Korean Air is in the process of acquiring the International Air Transport Association’s Center of Excellence for Independent Validators in Pharmaceutical Logistics certification and plans to be certified by the end of the first half of the year.

“Through this, we expect to provide improved services for pharmaceuticals,” says Noh. “Incheon International Airport will be equipped with temperature-control facilities for special cargo such as pharmaceuticals and fresh cargo in the passenger terminal. This will greatly shorten the transit time as well as maintaining the temperature and humidity of the cargo transit from belly to belly at Incheon Airport.”

Over on the cargo side of Incheon Airport, Korean operates two terminals with a total annual capacity of approximately 1.7 million tonnes. Noh says that the volumes of freight currently being handled at these two terminals are at appropriate levels and that there are consequently no short-term plans to expand the current facilities or build a third terminal.

Instead, Korean Air has been able to improve how efficiently it uses the terminals by investing in its digital capabilities. In April 2019, the airline completed the implementation of the new iCargo cloud-based cargo management system developed by IBS Software, introducing barcode scanners and tablets that enable integrated electronic workflows.

“Customized pieces of information such as reservations, sales and transportation status are provided in real time,” says Noh. “In particular, we will improve the cargo-tracking service on our website and mobile application, and plan to provide real-time information of cargo movements by e-mail and SMS. This system will improve mobile and online access.”

The main difficulties throughout the implementation process were in change management since it was no easy task to re-educate employees already familiar with the old system.

\“We invested a lot of effort and time to pay special attention to staff training and now the system works without any problems,” Noh says. “We utilized our experience and know-how in the new cargo system to enhance customer service.”

The iCargo system will form the core infrastructure for the future of the Korean Air Cargo business, with improvements continuing through to March 2020. The carrier will also introduce an AI-based cargo revenue management system to improve profitability, and aims to migrate its entire IT system to a cloud-based solution by 2021 to improve the customer experience.

“Korean Air is always listening,” says Noh. “We really want to improve the experience of the customers who have trusted us ever since we were founded 50 years ago.”