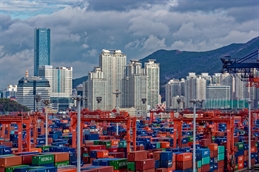 South Korea has unveiled a plan to boost the country’s cargo-handling capacity by investing more than US$35 billion in 12 ports across the northeast Asian country.

The investment would increase capacity to 1.85 billion tons per year in 2040 from the 1.32 billion tons in 2017, the Ministry of Oceans and Fisheries told reporters. In the same time frame, container handling capacity is expected to rise to 48.73 million TEUs from 27.17 million recorded in 2017.

The government plan is for it to put up ₩16.08 trillion of public money while giving the private sector ample scope to invest the remaining ₩25.7 trillion.

It’s a hefty amount of money, but not all of it is going to cargo. Part of the plan is to invest in cruise terminals, especially on Jeju island off the south coast, which is already a popular cruise destination. That alone will take ₩2.8 trillion won (US2.3 billion), some 5% of the total budget. Ministry officials were not initially available to discuss the plan with Asia Cargo News.

For cargo, the plan calls for the establishment of a new cargo port at Donghae on the east coast, but the key part of the investment will go towards transforming the country’s southern port of Busan into a megaport able to accommodate several 25,000 TEU vessels. Currently, Busan is limited to 20,000 TEU ships; reportedly, Busan will add 21 berths under the plan.

“We will make Busan Port the world’s third largest port by 2040,” Seong-hyeok Moon, minister of oceans and fisheries, which overseas port development, said via the official Yonhap News Agency.

Reports have estimated the cost for the Busan portion of the project at ₩13.6 trillion, just under a third of the total.

Busan port, South Korea’s main sea gateway, was the sixth-largest port in the world in 2018, handling 21.66 million TEUs of cargo, behind Shanghai, Singapore, Ningbo, Shenzhen and Guangzhou, although Shanghai and Singapore both move nearly double its throughput.

The announcement was made as Japan and South Korea bickered over trade issues and nuclear North Korea engaged in megaphone diplomacy over military exercises. The real significance is not so much in any of those things, but that it has more than 20 years since South Korea last had a national ports plan in 1997.

There is some feeling in official circles and beyond that South Korea’s shipping lines and ports need to step things up in an increasingly competitive world. More locally, rapprochement with North Korea, having spent 20 years hoping for an overland connection to China and onwards to Europe, has faded.

“First of all, we must speed up efforts to rebuild the shipping industry and recover its competitiveness and regain the public’s trust,” Moon said in his inauguration speech. “We need to reform the shipping industry into a low-cost, high-efficiency structure and actively expand our global logistics network.”

South Korea will also spend ₩487.5 billion (US$415 million) to establish an electric railway system along the east coast by 2022, according to transport ministry statements.

If the electric railway is fully established from the southern port city of Busan to the eastern port city of Gangneung along the sea coast, it could be extended through North Korea in the future, the Ministry of Land, Infrastructure and Transport said in a statement.

According to the ministry, electrified trains are currently in operation on two limited parts of the Donghae railway between the two port cities: the Busan-Pohang and the Donghae-Gangneung sections of the line.

Diesel-powered trains are common on the railways across the country; mainly, only the subway systems run on electricity.

For its part, Busan, the recipient of so much largesse, has worked hard on its own behalf with a number of different initiatives to build its business and position itself as a future Big Three destination.

Tellingly, back in April, Busan port officials set up its Southeast Asia Office in Ho Chi Minh City to enter the booming region, Busan Port Authority (BPA) president and CEO Nam Ki-chan said. This is the port’s fourth overseas office after Tokyo, Shanghai and Rotterdam. It comes ahead of a fifth planned office in Los Angeles.

Perhaps more telling, though, is the project to establish a blockchain-based system to improve its inter-terminal transportation (ITT) flow.

Once the expanded blockchain-based ITT system is in service, truck waiting time to enter or exit terminals is expected to decrease and truck backhauling to increase, contributing to a dramatic increase of logistics transportation efficiency and of container terminal productivity at the port.

A BPA official stated that “after adopting the blockchain-based ITT system, the authority will continue to improve the logistics flow in Busan Port by establishing an integrated logistics platform to make container entry/exit reservation possible.”