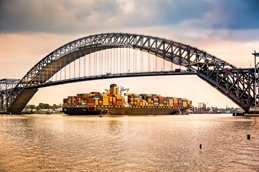 The Port Authority of New York & New Jersey has outlined a US$4 billion Port Master Plan 2050 that maps out the next generation of land-use and infrastructure development projects.

Volumes remain high at seaports around the United States, largely because companies are frontloading shipments to avoid the higher tariffs on some imported goods from China. While West Coast ports expect a decrease in volumes once frontloading activities cease, East Coast ports could experience steady volumes if companies turn to increased sourcing from India and Southeast Asian markets such as Vietnam.

Imports from China at the Port of New York & New Jersey, for example, are down approximately 12% from 2018. “However, imports from other countries are picking up the slack for Chinese cargo,” says Dan Pastore, who works with the strategic analysis group at the Port Authority of New York & New Jersey (PANYNJ). “The port is on pace for a record year. But until we see more import data, we won’t know which commodities will be the most effected.”

To ensure that cargo flows through the port smoothly and efficiently, PANYNJ has outlined its US$4 billion Port Master Plan 2050 that maps out the next generation of land-use and infrastructure development projects for future growth and development of 3,000 acres of cargo container facilities, automobile terminals, dry and liquid bulk cargo operations, as well as other operations at the port. Terminals cited in the plan include Port Newark, Elizabeth Port Authority Marine Terminal, Port Jersey Port Authority Marine Terminal, and Howland Hook Marine Terminal.

The goal is to ensure the port can maintain its role as a leading US maritime gateway and be ready to handle projected future volumes and the increasingly larger vessels that will carry that cargo.

“Still, we are closely monitoring the current trade environment and are hoping for an amicable resolution,” he says. “Our internal analysis shows that the tariffs are having a small impact on export cargo, but we are confident that we can regain volume through our ongoing effort to diversify our cargo mix.”

The port is working to diversify its cargo mix to help ensure sustainability in the near- and long-term. VPA officials expect this strategy will serve as a hedge during challenging trade environments.

VPA is specifically leveraging its two dedicated multi-use terminals (Norfolk International Terminals and Virginia International Gateway) that Harris describes as well-suited for heavy-lift, project, breakbulk and Ro-Ro cargo. A combined investment of US$700 million in the two terminals are expected to drive trade with all markets.

“Further, we are focusing some of our efforts on military Surface Deployment and Distribution Command (SDDC) cargo as well as marketing the port as a load and logistics center for the Mid-Atlantic’s growing offshore wind energy industry,” he says. “We are also investing in transload operations at two of our facilities to attract new commodities and provide customers with increased speed to market.”

Of equal importance, the Port of Virginia is the East Coast’s leading exporter of vegetables, having recently completed the USDA’s in-transit cold treatment certification program.

“We are in the midst of significant investment aimed at increasing our capacity to handle refrigerated cargo,” Harris adds. “This expanded capacity will help us grow our share of the imported fruit market as well as other types of refrigerated cargo.”

He emphasizes, however, that any unforeseen changes in the trade environment are always of concern. “But we are very optimistic about the long-term success of the Port of Virginia for a number of reasons: our volumes are forecasted to remain strong; we are on sound financial footing; we are making significant progress on our capacity expansion projects; and we are nearing the start of work on Wider, Deeper, Safer, a project that will make Virginia home to the deepest port on the U.S. East Coast.”

The South Carolina Ports Authority (SCPA) reports that its Fiscal Year 2020 is experiencing a strong start, recording its busiest July in port history at container terminals and inland ports. SCPA handled 210,542 TEUs at the Port of Charleston’s Wando Welch and North Charleston container terminals in July, up 5% from the year prior. As measured by the total number of boxes handled, SCPA moved 119,700 pier containers in July, up about 5% from a year ago.

Northeast Asia, including China, accounts for about 33% of SCPA’s cargo. China is its No. 1 trading partner. Since 2011, SCPA has also seen an increase in imported goods sourced from numerous Asian countries, including Vietnam, South Korea, Thailand, Japan and Taiwan.

“It’s too early to see the impact of shifts from China sourcing to Southeast Asia other than that which was already occurring,” says SCPA president and CEO Jim Newsome. “Some companies had already started this before the trade dispute in response to higher wages in China. It takes up to two years to adjust retail supply chains and achieve proper reliability.”

SCPA officials anticipate an accelerated shifting of sourcing to Vietnam and other Southeast Asian countries. “This will generally be beneficial to East Coast ports as it narrows the transit time disparity between West and East Coast services,” Newsome says. “And this shift will see more freight moving via the Suez Canal – the most logical routing. We also see this opening the door for 18,000-TEU deployments to the East Coast, which we are prepared to handle as we continue to invest in our infrastructure and deepen Charleston Harbor to 52 feet.”

The Deepening Project will make it possible for the port to handle 14,000 to 18,000 TEU vessels drafting 50 feet or more without significant depth and other navigation restrictions.

Nevertheless, Newsome sees the tariffs with China creating uncertainty among businesses and spurring risk mitigation in the supply chain. This is resulting frontloading activity.

“Imports are not greatly affected because consumer goods manufacturing is not coming back to the US due to high cost and workforce shortages,” he says. “Exports can be affected when alternative sourcing exists, such as with agricultural products like soybeans. The greatest impact from long-term uncertainty occurs with manufacturers and businesses that globally source, such as the automotive sector.”

Newsome emphasizes, however, that despite global trade uncertainty, SCPA has not shifted its strategy or growth plans. “SCPA remains well positioned to grow, particularly in the consumer goods distribution, refrigerated and frozen foods, and synthetic resin segments,” he says.

Intermodal cargo continues its powerful rise at the Georgia Ports Authority (GPA), achieving 10.5% growth in July. Over the past three years, the Port of Savannah has grown its rail volume by 35.4%, completing more than 507,000 intermodal lifts in the fiscal year that ended in June.

“We’re moving containers from ship to outgoing rail in less than 24 hours at the Port of Savannah,” said GPA executive director Griff Lynch. “That world-class service is why we’re capturing more business to inland destinations and converting more cargo from truck to rail.”

The growth comes as the first sections of new rail track have become operational on the Mason Mega Rail terminal, now 40% complete. Phase 1 of the US$218 million project will open by year’s end. When Phase II opens in 2020, the project will have doubled the Port of Savannah’s rail lift capacity to 1 million containers per year. It will offer enhanced capability for 10,000-foot long trains on terminal, and slash up to 24 hours off delivery times to destinations across the Midwest.

Port officials credit Savannah’s success to GPA’s continual investment in increasing cargo capacity. GPA commissioned four new Neo-Panamax ship-to-shore cranes in 2018, bringing its Garden City fleet to 30 – the most of any single terminal in North America. Another six cranes will arrive next year, allowing GPA to move up to 1,200 containers per hour across a single dock.