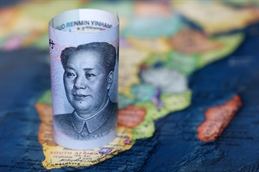 China is becoming one of Africa’s biggest trading partners, making huge investments in the continent.

Key players in the shipping and aviation industry have set their sights on further expanding operations in Africa as demand in the continent continues to expand despite a downturn seen elsewhere.

German shipping giant Hapag-Lloyd has announced two new services in Africa just this year, directly connecting South and West Africa to the Persian Gulf, India, Colombo, and La Réunion, as it continues to develop its position in the continent.

Hapag-Lloyd entered the African market about 12 years ago, and recently said it has since then seen “steady and significant growth” in transported volumes both to and from Africa.

“We have several plans in the pipeline to expand services from Asia to Africa as well as our coverage in Africa overall since we see Africa as an attractive market,” he added.

Hong Kong container shipping and logistics firm OOCL said it has also started to tap into the African market.

“OOCL is relatively quite new to this trade, as we have been slowly growing our presence in the African market over the past year,” it said in a statement to Asia Cargo News.

“Our Asia-Africa trade westbound liftings have been quite stable so far while eastbound tends to be relatively soft,” the firm added, noting that during this short period of time, OOCL has not yet observed any major shifting of manufacturers moving their operations from China to Africa nor any supply chain disruptions.

“Since we are a relatively small player at the moment, there is still plenty of room for OOCL to continue growing our presence in this trade [route].”

Emirates also observed a similar uptrend in its Asia-Africa operations.

The Dubai flag carrier, which has been operating in Africa since the 1990s, noted that increasing demand over the past five years has prompted the airline to expand its footprint there.

“We have always been in Africa, but over the years we have added cities. We started with Cairo, then Johannesburg, then we slowly started moving upwards to East Africa, Central Africa and then West Africa,” Ravishankar Mirle, VP, cargo commercial – Far East & Australasia, told Asia Cargo News on the sidelines of the China Air Cargo Summit 2019.

He noted that transport of high-tech products like phones has seen the most growth, with much of the rest of the increase being made up by other trader goods.“Additionally, in the past few years, we have seen growth in exports of flowers and seafood from Africa to Asia.

“Our African footprint is very, very deep. Our reach is very, very good. We see a growing middle class, consumer spending is increasing, dynamics of the country’s economics are slowly changing, and there was an uplift in the middle-class spending so, automatically, there’s a natural fit between Asia and Africa, and that is what we try to facilitate,” Mirle added, saying that “about 20%” of Emirates business is derived from Hong Kong and China to Africa.

“We see growth in Africa. That’s why we have grown from 10-12 cities 10 years back to about 28 cities now. Africa is basically a high-importing continent [and] the factories of the world are in the Far East.”

The International Air Transport Association (IATA) recently reported that in terms of freight volumes, Africa was the only region to have recorded year-on-year growth in the past four months as industry-wide volumes have declined, triggered by escalating trade tensions as well as geopolitical and economic risks. In September, total industry air cargo volume declined 4.5% from last year, while Africa grew 2.1%.

Hapag-Lloyd said that China is becoming one of Africa’s biggest trading partners with huge investments in the continent and that the trade connection between the two regions is anticipated to continue growing.

“We have seen a great increase in our Asia-Africa (and vice versa) trade and we project a continuous increase despite possible shifts in the manufacturing industries from China.

Hapag-Lloyd has considerable coverage in Asia and we are confident that we will continue to grow,” Osman said, adding that one of Hapag-Lloyd’s most popular routes is from Asia to West Africa.

China is Africa’s largest trading partner, with China-Africa trade valued at US$148 billion in 2017. It peaked in 2014 at US$215 billion and data from the General Administration of Customs of China, said that in the first half of 2019, China’s total import and export volume with Africa was at US$101.86 billion, up 2.9% year-on-year.

“The Asia-Africa trades are growing. The increase in disposable income and Africa’s growing GDP – six countries are in the Top 10 growing economies in the world – attests to markets stabilizing in the continent. We have also seen an increase in foreign direct investment from Asia and plans for infrastructure improvements and developments, which should contribute to a promising future for Africa,” Osman added.

Li noted that with anticipation of the growth of the processed product industry in Africa, the company is planning to build an industrial area in Africa.

“The Asia-Africa route is growing steadily, and we expect this trend will be kept in the coming year,” he said.