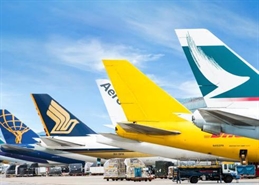 The Hong Kong Airport Authority has announced that cargo throughput continued to drop last year, still due to the "challenging business environment."

Though in December, cargo throughput decreased slightly by 1% to 443,000 tonnes compared to December 2018 level.

Despite the slowdown, exports recorded a 3% year-on-year increase in December 2019 while imports and transshipments both remained weak.

HKIA said key trading regions where Europe, India and Japan, which contributed the most growth.

Vivian Cheung, executive director of Airport Operations for the Airport Authority, described 2019 as a “challenging year.”

"Passenger figures to and from Mainland China and Southeast Asia experienced the most significant decreases during the month. However, transfer / transit traffic and Hong Kong resident travel registered strong year-on-year growth of 14% and 9%, respectively," it added.