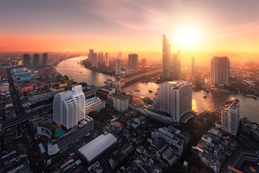 As Southeast Asian countries trade more with each other and do less long haul exporting, Thailand is taking the approach of acting as a gateway to the region.

Two neighbouring Southeast Asia countries, Myanmar and Thailand, are moving on with infrastructure build-ups – albeit in different ways.

More-headline grabbing of the two was Myanmar’s announcement of plans to push through its Kyaukpyu port and special economic zone when China’s president Xi Jinping visited in January. This is part of a bigger deal that is not without controversy.

“Both sides agreed to step up Belt and Road cooperation, push the China-Myanmar Economic Corridor (CMEC) from concept into concrete development, and endeavour to promote the three pillars of the CMEC, namely the Kyaukpyu Special Economic Zone, Myanmar-China Border Economic Cooperation Zones and new urban development of Yangon as well as framework infrastructure projects of connectivity such as roads, railways, electric power and energy,” said an official Myanmar communiqué.

A fuller version of the agreement was published in Chinese official media, which pointed out that Kyaukpyu is a multi-billion dollar deep sea port, and that its location on the Bay of Bengal coast is a strategic one. The same media also noted that the agreement, previously signed but stalled since 2015, is being taken up once again.

Tellingly, a Chinese consortium led by state-owned investment company CITIC Group signed the framework agreement with the Kyaukpyu Special Economic Zone Management Committee on the development of the deep sea port in the presence of the two leaders, the Global Times reported.

Development is the key word here. While the crude oil and gas pipelines have been built and are already supplying China without having to go via the crowded Straits of Malacca, what type of goods the port will move is still to be decided.

“There is interest in building a port to handle cargo at the site. This is at the negotiations stage with the authorities so there isn’t a real plan as of yet,” Jason Chiang, director of Ocean Shipping Consultants, told Asia Cargo News.

China will fund 70% of the investment for the project with Myanmar covering the remaining 30%. The initial phase of the project will reportedly include two berths with a total investment of US$1.3 billion, according to the agreement. A joint venture will be set up to construct and operate the port, according to one media report.

This fits into a pattern of a deal being agreed, stopped then restarted after a new government comes into power, similar to the East Coast Rail Link and the new government in Malaysia, which was wary of the costs and fearful of debt diplomacy, and asked for and got a reduction in China’s share of costs.

While some Belt and Road Initiative projects are moving forward, others have just dwindled such as the Melaka Gateway on Malaysia’s west coast. Planned to be an industrial port which would catalyze a modern, high-profile business city, its current outlook is to be a cruise ship terminal with some property development.

Largest of the big-ticket items – of which there are several – is movement across the board on the Eastern Economic Corridor, the three-province platform Bangkok is putting in place to facilitate new higher-value industries.

This includes development of U-Tapao airport, Map Ta Phut and Laem Chabang Ports, more highways and dual tracking of railways. “By the end of the first quarter [of 2020] all the big important items will be starting,” Kobsak Pootrakool, deputy secretary-general to the prime minister and secretary to the Council of Economic Ministers, told reporters.

While this shows the political will is there to push through certain reforms, there is another factor to consider: The government needs big infrastructure items and the funds they use to keep the economy rolling along.

Some of the details are important and show the progress Thailand is making. Since 2014 certain reforms have been pushed through, such as 2,000 kilometres of dual tracking, Pootrakool pointed out. And in an apparent reference to the building of Terminal D at Laem Chabang, he added that negotiations were close to finishing.

Behind all this is a big economic change, as Pavida Pananond, a professor of international business at Thammasat University Business School in Bangkok, pointed out.

Pananond’s basic argument is that changes in the region and world trade, with Southeast Asian countries trading more with each other and doing less long haul exporting, is resulting in the emergence of regional supply chains. These have China as their anchor, but Thailand also has a leading role.

“We can act as a gateway to mainland Southeast Asia. The activities that we need are logistics – distribution centres, all that,” she said, suggesting that what is happening is a start rather than an end.