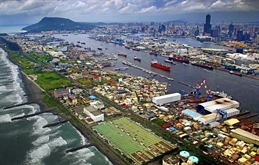 The chair of Taiwan International Ports Corporation recently told Asia Cargo News that the Port of Kaohsiung is being transformed into a hub for intercontinental container shipping, a centre of smart logistics, and a destination for cruise passengers and tourism.

The Port of Kaohsiung in southern Taiwan is aiming for a radical repositioning, with a new international container terminal (ICT) central to its plans.

“Overall, the Port of Kaohsiung is being transformed into a hub for intercontinental container shipping, a centre of smart logistics, and a destination for cruise passengers and tourism,” Hsien-Yi Lee, chair of Taiwan International Ports Corporation (TIPC) told Asia Cargo News. TIPC is the state-owned shipping company which operates the Port of Kaohsiung and other ports in Taiwan, including Keelung, Taichung, and Hualien.

The company’s goals for the ICT include establishing a state-of-the-art base for container shipping and logistics and developing a new wharf line and port land to accommodate future growth in cargo/container volumes. “This plan will establish the infrastructure and systems necessary to establish the Port of Kaohsiung as an important global hub for container transhipment and to repurpose the old port district into an area that will benefit the future overall growth and improvement of both the port and Kaohsiung City,” Lee added, hinting at both the scale of the ambition and the perceived need for it.

There are also plans to rebrand the port’s old wharf district to create a shared ‘port-city’ space, and to reestablish competitiveness in the petrochemical sector by relocating Taiwan’s southern petrochemical storage and shipping terminal.

Some of the work at the port, especially for the new container terminal, is already done. Phase 2 of ICT development work, which began in 2012, finished last year and was fully funded by the national government.

Land in the ICT’s logistics and warehousing district has since 2015 gradually been leased to CPC (the state-owned former Chinese Petroleum Corporation) and private petrochemical company operators for development, with construction work scheduled to finish and commercial operations in the district scheduled to begin in 2021, Lee added.

While Kaohsiung is undertaking this development to reboot its reputation, it is not simply rebuilding its past. The new facilities have factored in the larger sizes of the ships it hopes will be calling at the port in the near future.

“The ICT is installing ultra-large container wharves to meet the requirements of increasingly large container vessels. Shipping companies will begin commercial operations at these wharves after Phase 1 and Phase 2 container yard infrastructures and facilities are completed, respectively, during the latter half of 2022 and 2023,” said Lee. Initially, 20 bridge cranes will be installed in the terminal. Additional bridge cranes may be added in the future if justified by further growth in handled volume, he went on to say.

Apart from the container terminal, the ICT project also includes construction of a new administration building, an access control center and access gateways, consolidation sheds, a logistics warehouse, a repair and maintenance shop, port work offices, refueling stations, and power supply substations. The space being made for warehousing and logistics is expected to be over 300 hectares.

“The completed ICT will be able to handle container ships up to 23,000 TEUs in size. After ICT facilities and wharves are finished and in operation, annual container-handling capacity is expected to reach 4.5 million TEUs,” Lee added.

“Ports in Asia and the western United States are the first- and second-largest markets for containers handled through the Port of Kaohsiung,” Lee said. The main containerized cargo received at the port, by category and rank of importance, include base metals and vegetable products. The main containerized cargo exported from the port include plastics and rubber and base metals.