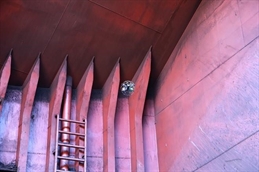 The Korean Register (KR) has successfully completed its first hull survey using both a drone and crawler.

"KR’s surveyors have been using remote inspection technology such as drones for surveys since 2017, the equipment allows the surveyor to inspect the vessel without requiring direct access," it said.

Since the launch of the service, KR has increased the range of inspection tools used, offering customers a more efficient and safer inspection service, which complements the traditional ship survey system and meets industry requirements.

Ship surveys usually involve a ‘close-up survey’ and a ‘thickness measurement’ of the hull structures. But to complete the process, surveyors must climb scaffolding (poles and boards made into a temporary framework, used when working on the high parts of a ship) which can be higher than a five-story apartment building.

KR said it has been possible to use drones to inspect the highest places, but a scaffold has still been required in order to complete the thickness measurement assessment, making the service inconvenient for shipowners, but using a crawler, it’s possible to measure the thickness of the hull at any point no matter how high, without scaffolding, making drone surveys far more practical and profitable.

"Remote inspection technology using such devices as drones and crawlers offer ship surveyors an exceptional decision-making tool, ensuring that the survey quality is equal to or higher than, that of a direct inspection,” said Yoon Boo-geun, EVP, KR Survey Division.

He noted that KR continues to apply new technologies to its services to increase the efficiency and simplicity of the survey work process.

"We are very pleased to apply KR’s advanced ship inspection technology for the first time to our POSSM ships. We look forward to benefiting further from KR’s digital tools and processes which I believe will improve our price competitiveness and operational efficiency," he said.