In a statement, Cirium said daily passenger jet flight activity has increased across most regions over recent days, with the recovery still led by the Asia Pacific region. 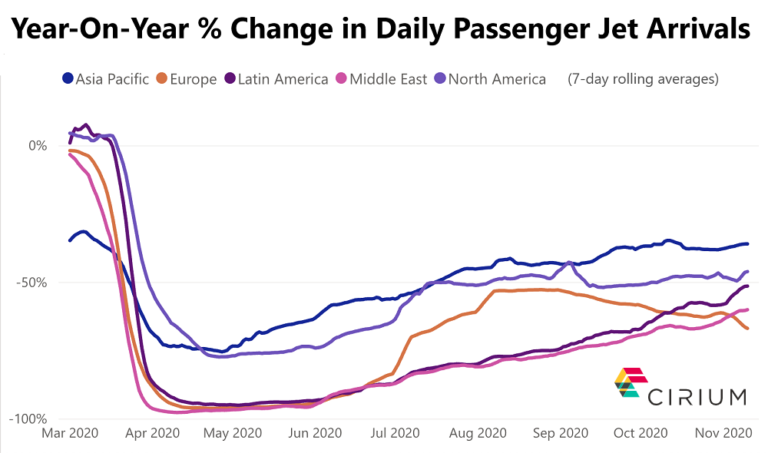 On November 10, in particular, Cirium said it saw total arrivals down just under 36% compared with the equivalent day last year. North America was at -46%, followed by Latin America (-51%) and Middle East (-60%).

"The notable exception was Europe where weekly average flight arrivals have dropped to nearly 67% below last year’s level, setting the continent’s recovery back to a level of decline last seen in mid-July," Cirium said.

It noted that rising Covid-19 cases and re-imposed national lockdowns in countries including France and the UK have prompted many of the region’s airlines to further pare back capacity and return some aircraft to storage.

There remained a huge disparity in the level of international flights versus domestic, with cross-border services languishing at 76% below last year compared with -34% for intra-country operations.

"At November 11 Cirium classified 31% of the global passenger jet fleet as having in-storage status, equivalent to just over 8,100 aircraft. However, in Europe, the proportion was over 35%, whereas only 21% of passenger jets operated by Asia Pacific carriers were inactive," Cirium further said.