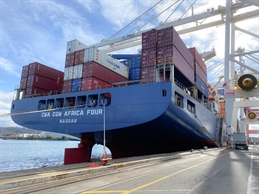 The CMA CGM Africa Four called The Northwest Seaport Alliance's Seattle Harbor for the first time on February 20 as part of a new service.

CMA CGM established its new Golden Gate Bridge (GGB) service to increase supply-chain consistency with a weekly service that will provide US importers with a reliable, fast-transit alternative to congestion at other West Coast ports.

CMA CGM announced the route last month in response to increased e-commerce demand and the need for quicker transit times to US markets.

The new service will increase import and export capacity in the NWSA gateway, adding additional container movements to and from inland hubs across the Midwest.

“We continue to make major investments in our maritime infrastructure to be able to capitalize on opportunities like the Golden Gate Bridge service that sustain our gateway, economy and living wage jobs,” stated Commissioner Felleman.

The GGB will have a Shanghai-Yantian-Oakland-Seattle-Kaohsiung-Shanghai rotation.

Northwest Seaport Alliance said CMA CGM is one of many ocean carriers selecting the gateway to reduce congestion issues.

The NWSA gateway, which includes the marine cargo operations of the ports of Seattle and Tacoma, offers critical advantages to the west coast supply chain.