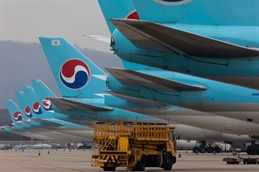 In a statement, the Korean flag carrier said through the partnership, the airline will purchase a month’s worth of carbon-neutral jet fuel for domestic flights departing from Jeju and Cheongju.

It said carbon-neutral jet fuel can be achieved by measuring the total amount of greenhouse gas emissions produced through fuel production, transport and consumption, and purchasing carbon credits to offset the carbon footprint.

It cited how greenhouse gases generated from aircraft operations account for 2% to 3% of total global emissions.

It said its recently introduced A220-300 is also equipped with the latest engine, which reduces carbon emissions per seat by 25% compared to existing models of similar capacity.

Korean Air noted that in 2017 it became the first Korean airline to use sustainable aviation fuel (SAF) when it was trialed on a flight departing from Chicago to Incheon.

In June this year, the airline also partnered with Hyundai Oil Bank to develop a foundation for biofuel manufacturing and its usage.