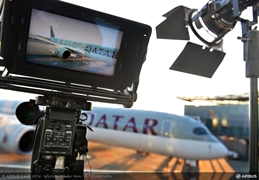 The first A350 XWB was in the spotlight in December for its handover to Qatar Airways at Airbus’ delivery centre in southwestern France. The A350 promises to affect air cargo markets as well.

Qatar Airways turned a new page in aviation history just before Christmas when it took delivery of the world’s first commercial A350 jet, Airbus’ answer to the Boeing 787 Dreamliner. The Middle Eastern carrier’s first A350 was due to commence operations on January 15, to be deployed on the Doha-Frankfurt sector.

Inevitably all the fanfare – not to mention the light show with which the airline presented its latest beast of burden to the world – was all about its impact on the passenger business, but the A350 promises to affect air cargo markets as well. It joins Boeing’s 787 and 777 types, widebodies with cavernous bellyholds that have boosted their operators’ cargo capabilities.

Airbus plans to add a freighter version to the A350 line-up, but it has signalled that this will not enter the picture before all three types are in service.

The aircraft manufacturer scored another first in mid-December when Egyptair signed up with EFW, its maintenance, repair and operations subsidiary, to turn two A330-200s into all-cargo configuration, plus options for two more A330-200 conversions. It is the first order for an A330 to be modified into a freighter aircraft.

“With Egyptair as launch customer we have made a very important step for this long-term A330P2F programme,” said EFW CEO Andreas Sperl.

According to EFW, Egyptair intends to replace its ageing A300 freighters with the A330s. The step marks a considerable boost in payload, as the A330 cargo plane can take about one-third more cargo than the A300F, besides offering better fuel efficiency and operating economics.

The order breaks a long draught for Airbus’ A330 conversion programme, which was officially launched in early 2013. Some observers have questioned the appeal of the A330 freighter, arguing that cargo planes of that size tend to be used almost exclusively by integrators, and all three leading ones – FedEx, UPS and DHL – have embraced the B767-300, leaving Airbus with a small base of potential customers for A330 conversions. However, Dan da Silva, head of modifications and conversions at Boeing, has pointed to several regional freight markets – such as Russia, China and Latin America – where mid-sized freighters like B767s and A330s make sense. Two Middle Eastern airlines, Qatar Airways and Etihad, have A330-200 production freighters in their fleets.

For its part, Airbus has been upbeat on the outlook for mid-seized freighters, arguing that the rise of emerging economies would boost intra-regional flows, which would require new and diverse networks based on a trend towards regionalisation. Hence, demand for mid-sized freighters with payloads between 30 and 80 tonnes should thrive, whereas that for large widebodies would diminish.

One of the early advocates of an A330 conversion programme was Qatar Airways, but its suggestions that such a programme was due were met with silence at Airbus at the time, as the plane maker had its hands full dealing with issues with its A380 and straining to ensure that its A350 development programme stayed on schedule.

Qatar Airways has not brought up the issue of converted A330s since the launch of the EFW programme. Last summer it placed an order for four 777 freighters, to join its all-cargo fleet of six 777Fs and three A330-200Fs. In addition it has five A330-200Fs on order and holds options for another eight A330-200Fs.