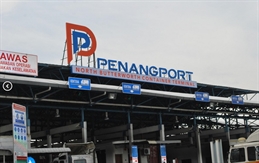 Less than a month after the Malaysian government announced its logistics masterplan, the port of Penang has unveiled its development strategy.

Less than a month after the Malaysian government announced its Logistics Masterplan, one of the country’s key ports, Penang, has unveiled its development strategy.

“We believe that there is huge potential to further grow our container and non-containerized facilities and services,” an official told Asia Cargo News. The official declined to be named.

The port has a fourfold business strategy which can be summed up as sweating its assets.

The other asset it is setting out to sweat is geography.

Penang is the only serious multi-purpose port in the north of Malaysia, with specialized berth facilities for containers, break bulk, dry-bulk and general cargo. Handily, this means that much of Malaysia’s electronics and manufacturing industries falls into the port’s catchment area.

Additionally, its proximity to southern Thailand enables Penang to tap into goods and products originating from there, the official said. About 40% of the laden containers exported through Penang are from southern Thailand.

This is not a market to be sniffed at or neglected. Not that Penang has any plans to.

“We will continue to promote this sector and work closely with all stakeholders to develop a cost effective and seamless cross-border movement of cargo from the south of Thailand to Penang Port,” the official said. “We are working with others within the logistics chain in order to provide higher capacity and service efficiency to the southern Thai business community.”

This is leading Penang to think of development not just in terms of volumes being moved but also the types of goods that will be moved. The port feels there is much potential for the development of a new and modern liquid bulk facility, among others.

“In line with the government’s initiatives of promoting the automotive sector in the north of Malaysia by developing an automotive hub, we believe that there is prospect for the development of Ro-Ro facilities here at the port,” said the official.

In a way, this is already happening, and Penang stresses that the improvement initiatives put in place in the past year have seen service levels improve at the port.

“Over the past six months, we have managed to improve our productivity levels by over 30%. We are now averaging 27 crane moves per hour compared to 18 moves per hour in early 2014,” said the official. “Turnaround time for vessels at our port is now much faster.”

All this has a beneficial knock-on effect for haulage companies and eases ‘last mile’ issues.

Gate turnaround time has improved by over 35% and on average, the hauliers are managing 2.5 moves per day per prime mover, an increase from the average of 1.8-2.1 moves per day previously, the official added, all of which is strengthening the emergence of Penang as a regional hub of note. It may not be the biggest or the best, but it is significant in what it does and whom it serves.

“Several shipping lines have recently introduced new services, and some have added on to their current ones,” the official said.

Among those recently introduced are Pacific International Lines’ weekly China-Chittagong Service and the Thailand-Straits-Chennai Service. This is operated by a consortium of shipping lines (X-Press Feeders, NYK Line, Mitsui OSK Line and Regional Container Line).

From April 2015, Yang Ming and COSCO will reinstate Penang Port as a direct port of call on its mainline service between the Middle East and Far East.

With the introduction of these new liner services, southern Thai exporters will have more options to choose from in terms of shipping lines (34 shipping lines), sailing frequencies (31 weekly vessel calls) and destinations (over 60 ports directly), the official said.