Tweet
Rating
MANAGING LARGER RISKS: WHERE NEXT FOR CONTAINER SAFETY? 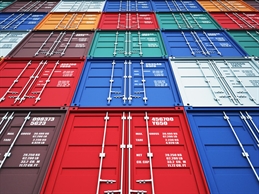 TT Club’s Andrew Huxley puts things into perspective and assesses how last November’s deliberations by the IMO’s Maritime Safety Committee will advance the cause of container safety at sea.

Container shipping is, some half century after inception, remarkably resilient and successful in operational terms – if not necessarily always in profitability. Mankind, particularly in the developed world, takes it for granted that it is possible to buy exotic fresh produce that has travelled weeks from another continent, or pick up a bargain in latest electronic gadgetry that is most likely to have been manufactured some distance from the consumer.

The ability to move hundreds of millions of these humble containers each year with relatively low ‘failure’ rate is testament not only to the original pioneers in the unit load shipping industry, but also to those who have incrementally improved processes, ensuring that increasingly varied cargo can be transported safely and securely. Formidable foundations were set in the early days, such as with the International Convention for Safe Containers (CSC), which has, with only modest amendment, provided guidance for the structural control of freight containers. Such foundations have been supplemented over the decades with a plethora of national and international regulations concerning how cargo should be packed in containers, and then loaded and secured on ships – work that necessarily continues.

Container shipping has had a share of maritime incidents over the last decade that demonstrate the challenges the industry faces as it seeks to match the appetite for goods to be transported against the need for cost efficiencies, most readily epitomized by the increase in individual ship capacity. When Rena ran aground in October 2011 on the Astrolabe Reef off New Zealand, the industry witnessed the complexity of the ensuing salvage operations carried out in adverse sea conditions and in a sensitive marine environment.

The logistical challenges following any incident could be typified by Emma Maersk, which suffered a flooded engine room in the Suez Canal in February 2013. Most ports have ‘dwell’ time for containers of 2-4 days and do not anticipate a mass influx to be handled and stored pending onward movement. However, in this instance 13,000 entirely undamaged containers were discharged at the unexpectant terminal.

While such incidents are by nature more to do with the ship itself – and therefore any kind of tonnage is vulnerable – the MSC Flaminia incident in July 2012 perhaps highlights what can be termed “adjacency.” Cargo on board the ship caught fire, claiming three lives and forcing the ship to be abandoned in the Atlantic, about 1,000 nautical miles from the English coast. The precise cause of the fire is now subject to litigation. Whatever is ultimately established, there is a simple truism that a single consignment, package or drum, packed in a container and loaded on board a ship has the potential to wreak havoc. This adjacency risk has continued to fuel the industry, with initiatives such as the liner operators’ CINS (Cargo Incident Notification System).

Towards the end of November last year the International Maritime Organization’s Maritime Safety Committee (IMO MSC) finalized work on two measures that are significant for all those involved in the unit load industry. However, they are but two stakes that begin to mark out the ground for what needs to be done in developing safety throughout the supply chain.

It is certainly welcomed that the amendment to SOLAS (the Convention for Safety of Life at Sea) concerning verification of gross mass for container has now been adopted and will become mandatory in July 2016. The implications of this relatively modest change – in essence reiterating the shippers’ responsibility to declare gross mass accurately and clarifying the means by which it can be done – reverberate through the international transport community. It will be important to develop consistency across the globe as to acceptable ways, and common standards, to confirm calibration and certification for both weighing the packed container (Method 1) and ensuring the correct calculation of the sum of all constituent parts of a packed unit (Method 2). As often, the devil is in the detail of implementation.

Much work will be required by the relevant governmental authorities worldwide to deliver even enforcement. Perhaps more importantly, those contracting to carry or handle container cargo need urgently to identify how each will develop compliance. This will be a mixture of procedural clarification, system enhancement and integration, and physical infrastructure. Freight forwarders and logistics operators will need to consider whether to seek approval under Method 2, or find ways to comply with Method 1. Ports and terminals – no longer able to load on board ships without verified gross mass – need to work out whether to check the verification and how to ensure compliance. Liner operators face the challenge to ensure their systems and communications flag and use a verified gross mass. Overall, in the current regulatory climate, TT Club suggests that the industry will police this safety initiative.

The second welcome stake is the approval by the three UN sponsors of the IMO/ILO/UNECE Code of Practice for Packing of Cargo Transport Units (CTU Code) and related Informative Material. Having been approved, it is immediately applicable globally as a non-mandatory Code of Practice. While certain jurisdictions may implement the code into national legislation – which is one of the benefits of a code – the entire freight industry must recognize that this detailed guidance may now be used in any litigation as demonstrating good industry practice. The TT Club cannot stress enough that all parties need to become familiar with the contents and develop ways to implement and encourage compliance with the CTU Code.

At TT Club we have repeatedly drawn attention to the consequences of inappropriate load distribution and badly secured cargo within CTUs (Cargo Transport Units, comprising freight containers, swap bodies, trailers and suchlike used in intermodal transport), including bodily injury. An increased level of training of those employed by shippers, consolidators, warehouses and depots to pack containers and other transport units is now essential. As a result, TT Club commissioned Exis Technologies, a leading developer of e-learning training courses for the transport industry to develop the CTUpack e-learning course, which was launched a year ago.

TT would like to emphasize that training is clearly the number one loss prevention measure and, if adopted as a core feature of the operator's culture, can greatly reduce the number of incidents incurred globally each year throughout the industry.

These two elements begin to mark out new safety parameters and will undoubtedly, if adequately and consistently implemented, bring about some improvements through the supply chain. However, to the extent that they are apparent, the benefits may accrue more to landside operations. The TT Club is amongst those in the international shipping community who are expressing concern that much is yet to be done in the maritime mode particularly, referring to the MARIN Lashing@Sea investigation. While the issues highlighted in that report of cargo weight are in hand, the other issues relating to ship planning, lashing, and dynamic ship-board information are extant.

Even recognizing the complexity of supply chain logistics and infrastructure, TT Club urges the relevant entities at IMO to seize all the issues that give rise to ‘unknown variables … [that] erode or eliminate the safety margins in place’ as succinctly described by the UK Maritime Accident Investigation Bureau’s report on MSC Napoli in 2008.

Andrew Huxley joined the TT Club in 2006. Prior to this, he had 25 years experience within the insurance industry working as both a broker and a risk manager in the UK, Middle East, Asia and Australia. Huxley is an associate of the Chartered Insurance Institute.