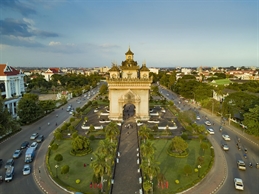 With most of the dozens of bridges and tunnels needed to traverse the mountains of northern Laos already built, Chinese state media reported in June that the US$6 billion China-Laos railway, which terminates in Vientiane, is 90% done, with service slated to begin in 2022.

Rail continues to develop in China despite the Covid-19 pandemic, with two new international links and news service adding to rail capacity.

With most of the dozens of bridges and tunnels needed to traverse the mountains of northern Laos already built, Chinese state media reported in June that the US$6 billion projects is 90% done, with service slated to begin in 2022.

The China-Laos link is a key component of the Belt and Road Initiative (BRI) and allows China to strengthen its links to Laos and onward to Thailand and other Southeast Asian nations. Two kilometres of track is being put in place daily by the Laos-China Railway Co., Ltd. (LCRC), a joint venture in charge of the construction and future operation of the railway.

There are also signals coming out of Hanoi about a rail line from the China-Vietnam border to coastal Hai Phong.

“This is an important railway line in the formation of a transportation network in the north of the Red River, connecting the northwestern region with the delta and Hai Phong seaport, one of the largest maritime centres in Vietnam,” Vietnam’s Ministry of Transport said in a statement.

Even more striking, this project is being planned with a grant from the Chinese government – one which Vietnam has clashed with loudly in the past.

It is expected the project will be submitted to the National Assembly for approval, the statement added, without providing a timeline.

As big a deal as this could be for Vietnam, if it happens, it is a highly strategic move for China, Shang-su Wu, a research fellow at the regional security architecture programme at the S. Rajaratnam School of International Studies, Nanyang Technological University, Singapore told Asia Cargo News.

Wu says the project would not only allow foreign relations with Vietnam to be improved but would also develop Yunnan Province in southern China.

“Freight would be more important for building up the cross-border production chain, a factor of creating more demand for passenger services,” Wu told Asia Cargo News. Wu sees the rail lines not just as links but drivers and developers in their own right.

“The two rail links between Vietnam and China, one to Yunnan and the other to Guangxi, are more than transportation but also economic corridors,” Wu said.

“As Vietnam has rail links to the two neighbouring Chinese provinces, it would not be easy to develop another one in a short while, until full or sufficient development is achieved. In addition, Hanoi faces financial limitations, and the current pandemic would worsen the situation. Thus, Vietnam would not afford another link with China.”

There is, though, a “however.”

“Political motives would be stronger than economic ones because Vietnam is the only Mekong country that holds a cautious attitude towards China’s influence, in contrast to the other four. In the maritime domain, Vietnam not only has territorial disputes with China, but due to its location and improving firepower, it could disrupt, if not deny, a major Chinese naval base in Hainan island,” Wu said.

All this comes as China’s rail industry provides other new services to the market.

Leading the way is DHL, which is already looking to increase the frequency of its Xi’an-Germany express rail service to weekly from fortnightly after adding new hubs, including in Budapest and Milan, at the end of 2019. Other lanes and services will be announced in due time, according to DHL.

Xi’an might be an increasingly important production platform, but it’s not the only source of cargo for the service to Neuss, which pulls in freight from all over China, including Hong Kong, as well as transit cargo from elsewhere in the Asia Pacific region, Zafer Engin, head of value-added services at DHL Global Forwarding, China, told Asia Cargo News.

The route is also faster by several days, having reduced transit time by at least five days to 10 to 12 days from a more usual 17.

“Speed is achieved using an alternative route, and with the support of our partners in this project. We also use our own GPS tracking system to monitor operational progress, and maximize movement speed,” Engin said.

The new route crosses Kazakhstan, and then the Mamonovo-Braniewo railway border between Russia and Poland.

DHL though sees even more potential.

“We strongly believe that there is still room for improvement in the end-to-end transit time. With our partners in this project, China Railway, UTLC, and Belintertrans, it is conceivable that we can reduce the length of a China-West Europe station to station trip to within 10 days in the future. We are also targeting to expand cargo shipments to include high-value items and e-commerce goods,” Engin said.