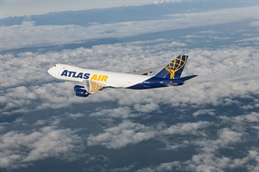 Wet leasing continues to be the main flavour of the air chater industry, including the two 747s Atlas has recently placed with DHL. (Photo: Atlas Air)

On the back of the International Air Transport Association forecast of 4 percent compounded growth in air freight over the next five years, the leasing/charter sector is set to ride the wave. Just as important is Boeing’s estimate that the world freighter fleet will grow by more than half over the next 20 years to 2,730 units.
“The economic recession that began in 2007/08 had a significant adverse impact on airfreight volumes throughout the world, and forced many shippers to pursue slower, less-costly modes of transportation,” said Brandon Fried, executive director of the Air Forwarders Association in Washington. “And I would agree that the air cargo market is improving, particularly in the past six months.”
Fried tells Asia Cargo News he is more optimistic than others “because of what I am seeing among many of our small- and medium-sized members, who have been reporting significant spikes in their volumes throughout this past year.
“Members have seen significant increases in perishable and electronics shipments, which I think points to a trend of future growth,” said Fried. “We have also seen more shipments coming from the western portions of China as well as countries in Southeast Asia including Vietnam and Cambodia. This is probably due to increasing wage pressure within China as manufactures see less costly ways to produce products, a factor which is also contributing to the ‘near shoring’ of manufacturing where goods are being produced closer to the United States in Mexico and other countries in Latin America.”
Sentiments and statements from companies and agencies support the improvement in business climate, with expressions such as “robust” and “strongly confident” making the rounds. In the US, the two big leasing companies, Atlas Worldwide and Air Transport Services (ATSG), reported good first halves in 2014, with ATSG noting “consistent growth in air freight since Q4 2013.” Atlas has stayed with its half-year forecast that “airfreight volumes continue to improve, and recent forecasts suggest that airfreight demand may grow by several percentage points in 2014, the first real growth after three essentially flat years.”
Charter providers are humming the same tune. For the UK-based Air Charter Service, charter numbers rose 22 percent in the first half of 2014. Justin Lancaster, group commercial director, tells Asia Cargo News: “I think an upturn in the general world economy has played a factor in this. The growth we’ve seen has been in many of the regions where the general economy of the countries or regions is also growing. But also we have strengthened our teams globally and this is paying dividends.
“As always in the ad hoc charter market it is very hard to make forecasts for the next year,” said Lancaster. “There are so many factors that are unknown, and most are out of the hands of the charter broker. I would say however at this point the outlook for next year looks very positive and we go into 2015 in optimistic mood.”
Companies will need to hone their skills and business plans carefully. ACMI – aircraft, crew, maintenance, insurance – wet leasing continues to be the main flavour of the industry (Atlas has just placed two 747s with DHL), but dry leasing is providing solid results.
They are also choosing partners carefully, with Atlas and Chapman-Freeborn teaming up on projects.
Overshadowing these considerations is the ever-vexing question of whether bellyhold cargo will knock pure freighters out of existence and hence change the whole nature of chartering. The CAPA Centre for Aviation, in an analysis of the industry, said “air cargo capacity seems to be in a permanent state of oversupply. The capacity offered is almost always more than twice the level of demand.
“Passenger bellies account for more than half of this capacity and are little more than one-third full. If belly space cannot be filled, it should not be designed into aircraft. It is incumbent on the aviation industry, including airline management – both passenger and cargo – and airframers, to apply the capacity discipline now widely-adopted in the passenger business to air cargo.”
The charter market is still a small part of overall world cargo business. Boeing’s figures put scheduled freight revenue-tonne-kilometers in 2013 at 183 million, compared with only 16 million for charter flights.
The market area of importance will continue to be Asia Pacific, which holds 36 percent of the global freight market, according to analysts Transport Intelligence.
Africa is being looked at with greater attention for leasing. Nigeria is one area of importance, with the national Civil Aviation Authority saying that 60 percent of passenger and cargo aircraft operated domestically are leased, as this reduces operational costs.