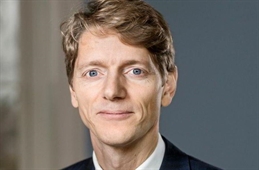 AP Moller-Maersk has announced a revamp of its board of directors describing the move as a "generational change" with Robert Maersk Uggla to lead the company's top supervisory body.

He will assume the role of Chair of the Board after the liner giant's annual general meeting on March 15.

Denmark's largest transport conglomerate said in a statement that Marc Engel will be new Vice Chair of the Board, replacing Ane Maersk McKinney Uggla as vice chair.

Meanwhile, its current chairman Jim Hagemann Snabe will continue as an advisor to the new Chair of the Board and the Board of Directors, it added.

"After three decades on the Board, it is time for me to pass on the responsibility to Robert, who with his 7 years on the Board of Directors has been a driving force in the development of A.P. Moller - Maersk," Ane Maersk McKinney Uggla said, adding that the transformation of A.P. Moller - Maersk into an integrated container logistics company is well underway as a result of the efforts of the Board of Directors, the management led by Søren Skou.

Robert Mærsk Uggla is the great-great-grandson of Peter Maersk Møller, who founded the company.

Jim Hagemann — who has served on A.P. Moller-Maersk's Board of Directors since 2016 and been Chairman since 2017 — said the "timing of a generational change is therefore well chosen."

"Robert has been involved all the way and during his time on the board has played a central role in the restructuring and transformation," Hagemann added. "I know that Robert with dedication will build on the momentum that is now established and I look forward to contributing to the company's continued development."

The younger Maersk Uggla, for his part, noted that he will continue AP Moller-Maersk's transformation.

Robert Maersk Uggla has been CEO of A.P. Moller Holding since 2016, where he is leading the A.P. Moller Group's renewal and investments.

Marc Engel, meanwhile, has served on A.P. Moller-Maersk's Board of Directors since 2019 and sits on the Board's Transformation & Innovation Committee. He is the outgoing Chief Supply Chain Officer of Unilever.