CMA CGM announced that it has become a partner to France's first industrial demonstrator of hydrogen and methane production called "Jupiter 1000"  which is piloted by GRTgaz.

In a statement, CMA CGM said this installation aims to produce green hydrogen from renewable power and also e-methane, a synthetic gas using this hydrogen and CO2 captured from the industrial process. 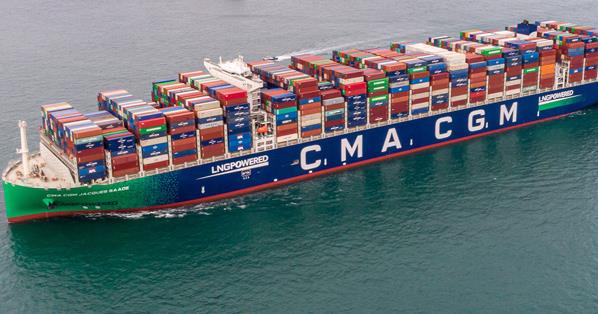 "Through its participation in the project, CMA CGM aims to further accelerate the pace of its fleet’s transition to new very low-carbon fuel sources," the French liner said.

With Jupiter 1000, GRTgaz intends to provide solutions to the challenge of decarbonizing gas networks and the intermittent nature of renewable energies. The idea is to convert a portion of renewable power, at times when it is abundant, into low-carbon energy (hydrogen and e-methane) so it can be stored on a large scale and for lengthy periods.

A second electrolyzer, employing a different technology from the previous one, successfully entered service at the beginning of November 2021.

Beyond producing hydrogen, Jupiter 1000 also recycles CO2 by converting it into synthetic gas. The CO2 produced by the boiler at Asco Industrie, a steelmaking plant located nearby, is captured at the foot of the chimney stack by equipment developed by Leroux&Lotz. The CO2 is then piped to the Jupiter 1000 site.

CMA CGM said rather than being discharged into the atmosphere, the CO2 is recycled with hydrogen in a methanation unit installed by Khimod. The syngas produced can be used instead of fossil fuel gas and employed freely across all transport and distribution networks. The hydrogen methanation facilities are due to be commissioned in June 2022.

CMA CGM said in its announcement that the group is committed to the energy transition and has set itself the goal of Net zero carbon emissions by 2050.

"In pursuit of this goal, the Group is focusing on low-carbon fuels to power its ships. By providing access to the results of its green hydrogen production, methanation, and CO2 capture, Jupiter 1000 will enable CMA CGM to accelerate the development of the production sector for synthetic methane, a key fuel for decarbonization of its operations," it added.

CMA CGM already has 28 “e-methane ready” dual-fuel, LNG-powered containerships and will have a total of 44 vessels of this type in service by the end of 2024.

"The Jupiter 1000 project is of great interest to the CMA CGM Group as part of our efforts to find very low-carbon new fuel sources. To help us meet our Net zero target by 2050, we are resolutely committed to searching for and industrializing innovative non-fossil fuel gas solutions, with biomethane and synthetic methane," said Christine Cabau Woehrel, executive vice-president of the CMA CGM Group.

"The Jupiter 1000 project will give us access to one of the first demonstrator projects of the kind. Moreover, it is located at Fos-sur-Mer, where we recently completed our first LNG bunkering operations. We intend to support the potential emergence of a whole new industry,” Woehrel added.