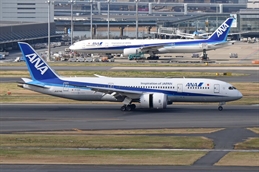 Japan's largest said the program begins with four inaugural partners including Itochu Corporation, the Japan Transport and Tourism Research Institute (JTTRI), and Nomura Holdings, Inc. — which will be able to reduce carbon emissions from their employees' business travel.

"We are excited to offer the SAF Flight Initiative to a number of Japan's premier companies," said Shinichi Inoue, chief executive officer and President of ANA. "ANA is proud to be a sustainability leader as the first airline in Asia to offer a program for reducing carbon emissions through SAF, and we look forward to advancing our program together with more partners."

ANA noted that it is taking various approaches to incorporate more responsible environmental practices into our business and for the stable procurement of SAF.

For the expansion of SAF production in Japan, ANA is working with companies through the "ACT FOR SKY" coalition as well as with other companies engaged in the development of SAF.

In addition, ANA is working with Neste, LanzaJet, Inc., and other overseas manufacturers to build a sustainable supply chain.

ANA noted that the SAF Flight Initiative will improve the overall consumer experience while also placing ANA in a position to achieve the ambitious Sustainable Development Goals that the airline has long been committed to.

"By uniting a range of programs under a single banner, ANA employees will be empowered as they work together with corporate partners to achieve the 2030 and 2050 sustainability benchmarks," the carrier said.