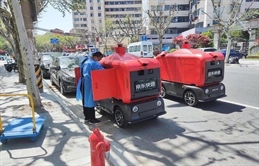 Shenzhen started allowing fully autonomous vehicles to run on certain roads in August as a local regulation on smart and internet-connected vehicles went into effect.

Chinese state media reported that the regulation stipulates that fully autonomous automobiles without drivers can run on roads in areas designated by the local traffic management department.

This could be a boost to plans from logistics companies to look into autonomous robots and vehicles for last-mile delivery.

Shenzhen-based autonomous driving start-up DeepRoute.ai conducted road testing in downtown Shenzhen. One driverless car of the company finished a trip of 9.6 km in about half an hour.

JD Logistics, FedEx, and DHL have earlier announced plans to look into the viability of autonomous robots for delivery.

In 2021, FedEx did tests on autonomous delivery vehicles in China while JD Logistics also turned to autonomous robots for last-mile delivery in Shanghai at the height of the lockdowns in the city earlier this year.