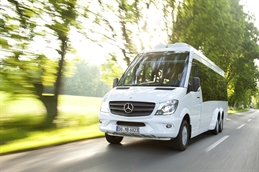 Auto OEMs are consolidating their operations closer to their markets, including Daimler, which will be localizing much of the production of its next generation Mercedes Sprinter in North America.

Near-shoring and integration among logistics providers are two of the main topics occupying the minds of auto logistics firms and manufacturers. Original equipment manufacturers (OEMs) across the globe are finding that the productivity/wage rate ratio is swinging favourably to developed countries, including Canada and the US.

According to the Boston Consulting Group, Mexico now has lower manufacturing costs than China, while the US is only 5% worse in manufacturing-cost advantage. (Boston says more than half of large US companies are considering reshoring.)

Not only that, but auto OEMs are tending to consolidate their operations closer to their markets. Thus, it has come as no surprise that Daimler will be localizing much of its next generation Mercedes Sprinter in North America (in one of the NAFTA countries of Canada, the US and Mexico) in virtual full OEM manufacturing mode.

Previously, Sprinters were built in Germany, knocked down and reassembled in the US. According to Mercedes this meant “a significant competitive disadvantage on the US market for Mercedes-Benz, since it leads to long delivery times, makes the vehicle more expensive for US customers, and is therefore not economical in the long term in view of the expected growth in demand.”

But the auto market should not expect a huge swing to developed countries. “The trend is there,” says Henry Pringle, an associate in the operations practice for Alix Partners in New York. “The cost differential is narrowing,” he tells Asia Cargo News, “but not enough to offset the overall manufacturing base in traditional low cost countries.” He emphasizes that NAFTA is the driving force for production shifting to North America. Volker Mornhinweg, head of Mercedes’ van division, agrees that the free trade agreement is what makes Sprinter manufacture possible in North America.

The momentum for reshoring spreads throughout logistics. Rosemary Coates, president of Blue Silk Consulting near San Jose, California, has been telling industry gatherings that companies have to pay strict attention to the way they reshore – focusing on robotics, 3D printing and other forms of automation.

Pringle notes that there has been considerable consolidation of 3PLs and 4PLs, but expects that the trend will slow. A new type of owner has come in, duplicating the experience of marine terminals – hedge funds and investment banks that look only at the profit to be made and not the technical aspects.

“Fast in and faster out” is the comment of one industry executive.

Caterpillar is a prime example. Its logistics arm Neovia was 65% held by investment firm Platinum Equity two years ago, but 100% ownership has now passed to Goldman Sachs and Rhone Capital affiliates.

All auto logistics companies dealing with the US are having to grapple with the problem of congestion and slowdowns at the ports of Long Beach and Los Angeles.

“US ports are detrimental to the supply chain, “says Pringle. “To some extent, vehicle shipments are better off than other industries, because major vehicle ports such as Baltimore and Jacksonville are free of the West Coast problems, but Los Angeles is still a huge gateway. Labour is a consistent issue, but getting to the hinterland is also difficult because of ageing infrastructure. Yet there is no silver bullet to sort it out.”

There is general agreement that US railway systems will continue to lag in efficiency and speed compared to Europe and parts of Asia, due to regulatory restrictions and the tussle between the privately-owned networks and federal government over which is responsible for paying for capital costs. Volumes of vehicles and related equipment are up 4.2% up for the nine months to the end of September, at 690,000 carloads, according to the American Association of Railroads.

Chassis supplies and allocations are cited as one of the main reasons for the Los Angeles/Long Beach snarl, as ownership is spread among the various port tenants and users, who squabble as to whom is responsible for what.

Vehicle volumes worldwide are getting back to levels last seen in 2007/2008, raising the question of whether the pure car and truck carrying ocean fleet is up to the task. Industry insiders foresee a tightening of available capacity, which will probably mean that 3PLs will have to do their bookings earlier. “An interesting aspect of this is the trend towards the bigger ships, much in the same fashion as the container market,” says Pringle. “Cascading will take place on the minor routes as they take on bigger ships which were previously used on the main trade lanes.”