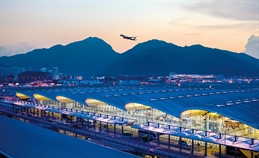 The International Air Transport Association (IATA) said it would take a "considerable time" for Hong Kong to recover its status as a global aviation hub as airlines remain hesitant to allocate more capacity to the financial and aviation centre amid constantly changing pandemic restrictions in the city.

Willie Walsh, IATA's director general said Hong Kong as a hub has "clearly been severely impacted" due to the Covid-related restrictions and noted that "without question," other hubs are benefitting from the problems that Hong Kong has experienced.

"The recovery of Hong Kong as a global hub, I think will take some considerable time," Walsh told a media briefing.

The IATA chief noted that airlines got "fed up" with unpredictable travel rules in the city — and Hong Kong needs some sort of "stability" in its regulations before carriers' confidence to return in full swing will be restored.

"It's not just the relaxing of the restrictions, it has confidence that those restrictions won't be reintroduced," Walsh said.

"Because I think what caused a lot of concern for airlines was the way in which the restrictions were being relaxed and reintroduced at short notice so it was proving to be very difficult for them to plan their capacity."

"And as we continue to look at recovery and as airlines bring more capacity back, I think there will be a greater sensitivity to those markets that are unpredictable," the IATA chief added.

For instance, Walsh explained that airlines would be planning capacity in Hong Kong, only for the regulation to change.

"They were getting flights stuck in Hong Kong, crews stuck there — they’re [airlines] not going to take that risk," he warned.

"So we would need to see, I think greater stability in Hong Kong in terms of the regulations that apply because, without question, airlines just got fed up with the changing regulations almost overnight," Walsh added.

In October passenger traffic at Hong Kong International Airport reached 755,000 representing only 13% of pre-pandemic levels despite the easing of travel curbs in the city.

(Update:)  Hong Kong has already rolled back some of its most stringent pandemic restrictions. On December 13, the city lifted all restrictions on arrivals to the financial hub and ended its previously implemented '0+3' scheme for travellers that test negative from December 14 onwards.