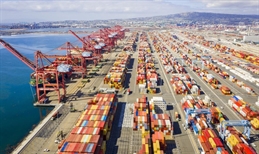 The San Pedro Bay ports of Long Beach and Los Angeles will phase out the option to collect a “Container Dwell Fee” on January 24, 2023, as congestion in two of North America's busiest ports continues to ease.

Since the program was announced on October 25, 2021, the two ports have seen a combined decline of 92% in ageing cargo on the docks.

Port of LA and Long Beach said while the executive directors of both ports have had the authority from their respective harbour commissions to implement the fee, it was never activated because cargo owners could clear their long-dwelling cargo off terminals.

“This fee was conceived as an incentive to ease congestion, keeping imported goods flowing to stores across America,” said Mario Cordero, executive director of Port of Long Beach.

“Measured by this standard, we can all appreciate the policy’s success, and best of all, the fee was never implemented.  We thank cargo owners and terminal operators for working with us to make operations more efficient, and of course, dockworkers for their dedicated labour,” Cordero added.

“I said when we launched this program that I hoped we would never collect a dime because that would mean that containers were moving off our docks. And that’s exactly what occurred,”  Seroka said.

“I’m grateful to the cargo owners and all our waterfront workers for all their successful efforts to improve the efficiency of our operations.”

Under the temporary policy, ocean carriers could be charged for each import container dwelling nine days or more at the terminal. Fee implementation has been postponed by both ports since the start of the program.

The Long Beach and Los Angeles Boards of Harbor Commissioners both extended the fee program through January 24, 2023.

Neither port plans to extend the program beyond that date.