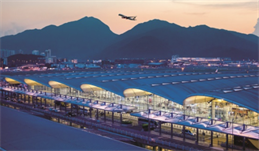 For December alone, HKIA saw cargo throughput drop 26.4% to 351,000 year-on-year, as flight movements increased 8.7%  to 15,770 as more passenger flights were put back in service following the easing of pandemic restrictions both in Hong Kong and the Chinese mainland.

December's cargo volumes were also slightly lower than the 354,000 tonnes recorded in November.

Lam noted that import and export cargo decreased by 33% and 26% year-on-year, respectively, compared to the same month last year.

Meanwhile, Southeast Asia, North America, and Europe recorded a similar significant decrease in terms of cargo volume in the month.

In contrast, the Airport Authority Hong Kong (AAHK) reported a surge in passenger volumes for 2022.

HKIA handled a total of 5.7 million passengers, representing a year-on-year increase of 318.4% driven by traffic to and from Southeast Asia and Japan.

In December alone, the airport handled 1.6 million passengers, representing a surge of 938.7% compared with the same period last year.

"The airport endured another challenging year in 2022 as the impact of the pandemic continued," Lam said. "Nevertheless, we saw the light at the end of the tunnel when the HKSAR Government relaxed travel restrictions and quarantine requirements for inbound travellers in the second half of the year."

"Passenger traffic at HKIA started to pick up in the last quarter of 2022. We also have a good start in 2023 with the resumption of normal travel with the Mainland. We are confident that passenger traffic will continue to recover at HKIA," the AAHK chief added.