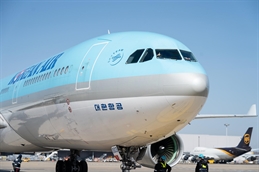 Korean Air will boost its belly cargo capacity to and from Europe as it announced the resumption of more passenger services to the continent starting in March.

After a 3-year hiatus due to the Covid-19 pandemic, Korean Air said it would restart services to four major destinations in Europe, including to Prague and Zurich routes, from the end of March, followed by the resumption of the Istanbul and Madrid routes at the end of April.

Starting on March 27, the airline will resume its operations from Incheon to Prague three times a week, with returning flights that will depart the following day.

Flights between Incheon and Zurich will begin on March 28 and operate three times a week.

Meanwhile, the Incheon-Madrid route will resume on April 25 with services three times a week on Tuesdays, Thursdays and Sundays.

The airline said Prague, Zurich, Istanbul and Madrid are all very popular destinations.